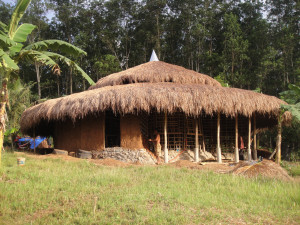 Amidst the ever growing fondness for going “Green”, and among the countless innovations and projects that disguise themselves as sustainable, the mud house may stand out as the truest form of architectural sustainability. This mud house, built in Puerto Princesa, Palawan, is built primarily of local, indigenous materials, some of which is taken right from the land where it stands.

The mud house is circular in form, thus distributing the loads along the entire perimeter of the wall, and eliminating the need for corner posts. A central open space can double up as both a living and dining room. From the center, axes jut out towards the perimeter walls, creating trapezoidal-like spaces that form 2 bedrooms, a bathroom, and an open kitchen. Before entering the house, there is a patio that can likewise serve a multitude of uses.

The structure’s foundation is dug barely a foot into the ground, along the footprint of the exterior and interior walls, and is filled with gravel and a minimal amount of concrete. In areas where the topography dips, adobe stones are placed to retain the earth and even out the floor. From here, the frame is made entirely of bamboo. Poles about 50mm in diameter are used for vertical posts approximately every 3 meters, while in between is a vertical and horizontal grid of flat bamboo strips, spaced about 300mm both ways. Some connections are tied together with straw wrapped in wet mud. The roof’s framing system is formed by 50mm bamboo strips as rafters, and smaller flat strips for purlins.

This bamboo frame supports walls made of dried mud, about 200-250mm thick. For additional strength, and for a little more aesthetic value, the final layer is coated with lime. The floor is likewise made of hard, compacted mud, though a thin layer of concrete is also an option.  The roofing material is several layers of cogon grass. For additional light, bamboo frames create window openings and recycled bottles are installed within the walls. Inside the mud house, fixed benches, counters, and cabinets are also constructed with the same bamboo and mud combination. 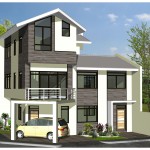 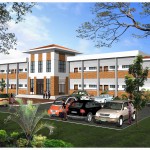 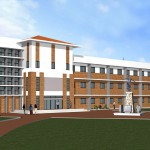